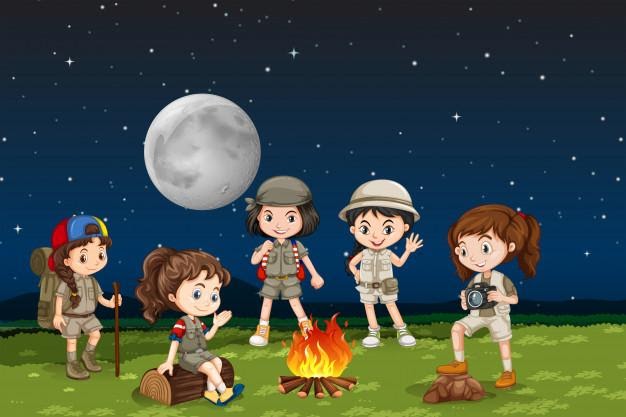 Adventure stories for kids take them into a whole different world. The characters in adventure stories mesmerize them so much so that they start visualizing them in those roles. Sharing an adventure story with a child who is looking dull or lacks friends is a great way to build curiosity.

Adventure stories are different from moral stories in many ways. Moral stories revolve around daily life characters like animals, trees, and human beings. An adventure story, on the other hand, involves many fantasy characters including demons, sorcerers, genie, devils, and other creatures that we don’t meet in daily life.

If your child loves adventure stories, well, it can be challenging for you to answer their curious minds. Here we have a collection of adventure stories for kids that will help you spend good storytelling time with your little ones. Hope you and your kids enjoy them!

Story of a Boy and a Magic Stone

Once upon a time, there lived a young boy with his mother. His father passed away while he was an infant. His mother struggles hard to make the ends meet.

They are poor and are waiting for good days to come. All that she wanted was to feed her son 3 times a day and give him a good education. But with the little money they have, it seems a distant dream for her all the time. She never lost her hope and kept her faith in God praying for good days to arrive.

One night, the boy had a vivid dream in his sleep.

The boy saw a saint who gave his clear instructions on how he can become rich. According to him, there is a magic stone that can convert sand to gold in a secret place. But to attain that stone, the boy has to cross forests and dangerous lakes with care and all alone.

The whole journey will last for 21 days and if the boy completed the journey successfully according to the Saint’s instructions, he can get the magic stone.

In the dream, the saint also gifted a magic robe and a ring. If the boy wears the magic robe, no one or nothing can see him. In the same way, if the boy rubs the ring thrice and says, “Hubuja!!” he will get food and water. He also warned that the stone should be used judiciously and not with greed.

The boy woke up suddenly at midnight because of this dream. He could not understand if this was real or only a dream. To his surprise, he found the magic robe on his bedside and a golden colored shiny ring on his right-hand ring finger!

The boy immediately woke up his mother and told all that the saint shared with him in the dream. He also said about the journey alone. He showed the magic robe and ring. The mother was first confused. She thought it must be a normal dream. But after she saw the robe and the ring, she had to believe that this is something powerful. But she was very afraid to send her son all alone! He is a young lad and how can any mother send her son to forests and dangerous lakes?

While she was confused with these thoughts, the boy assured his mother. He said that there should have been a reason why the dream occurred to him. Also, he said that their poverty will end forever if he gained that magic stone. Saying so, he convinced his mother.

The next day, early morning, the boy took his mother’s blessings and set out on the journey. He traveled many miles east and reached a forest as per the Saint’s instructions.

By that time it was getting dark and the boy started feeling hungry and giddy at the same time. He sat in a place and rubbed the ring thrice. At the very mention of “Hubuja!!”, viola. There are many favorite food items for him. He ate all of them happily. Then he started feeling afraid as it was getting dark and he is alone in the middle of a forest. Then he remembered the robe.

The boy cleared an area and made it convenient to sleep. He slept by wearing the robe. Now, no thieves or animals or anyone can see him! There he goes!

Thus, he traveled for ten days and then finally reached a lake. He had his dinner at night and slept at the lakeside like always in his robe.

Finally, he crossed the lake and reached another forest.

As he moved on, he reached a dead-end where there was nothing but a deep cave. He could see nothing and was so scared to enter it.

He sat in front of the cave and wanted to have a meal. He rubbed the ring thrice and said “Hubuja!!” He had a sumptuous meal and drank the delicious honey that also comes along with the meal this time.

The boy somehow gathered some courage and set a step into the cave. To his surprise, there was a torch kind of light from his own eyes. This light helped him see the path. He understood that it could be due to the power of the honey. He never got honey till now from the ring but got it only today. He thanked the Saint wholeheartedly and started moving forward.

Like this, he kept walking, walking, and walking. Deep inside the cave, he knew no morning no night. It was dark and all that saw was a path filled with dried leaves. When he was tired, he sat and slept using the robe. The journey lasted for many days. The boy finally reached a big trunk. The trunk was dazzling and he opened it without any delay.

Good, God! He saw a dazzling shiny stone. He took it into his hands and kissed it with happiness. Viola, there he goes! He is in his home with his mother!!

Both the son and mother knew no bounds for their joy. The mother was so happy that her son returned home safely and successfully.

They thanked the saint immensely and to God for giving them their most awaited happy times. From then, they started turning sand into gold as and when they needed,  taking care of Saint’s instructions and lived happily without any poverty. 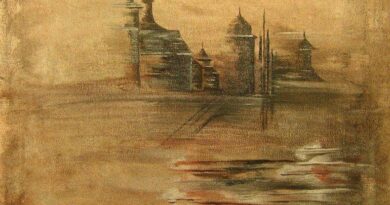 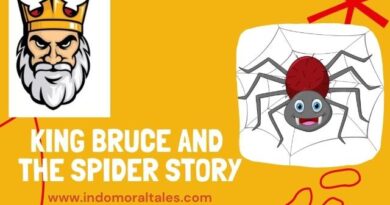