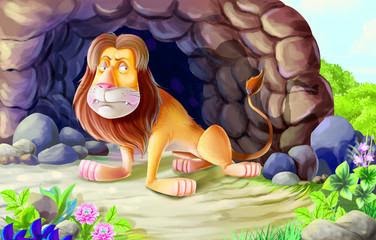 We all are so busy with the hustles of life. It is very important to take a break from them as it will help to grow us mentally and physically. In the olden days, our parents and grandparents used to narrate us beautiful and entertaining stories. This was their escape from their daily lives.

Below is a story of a foolish lion and a clever rabbit. The story teaches us a lesson about how a little clever rabbit saves all the other animals from a ferocious lion.

The story of a foolish lion and a clever rabbit is mentioned below:

A long time ago, in a forest, there lived a ferocious and heartless lion. The lion was very proud of his strength. He used to hunt and kill a large number of animals daily for fun even though he is not hungry.

All the other animals were very scared of this cruel lion and also worried about the fate of the forest as they knew no animal will be alive if the same thing goes on.

One fine day, all the other animals decided to think of a solution to this problem. They all called up for a meeting.

A deer in the meeting said, “I am very scared to live here. The lion is eating, killing more animals than he could eat. What shall we do now?”

A bear said “If the lion continues to do the same, killing all of us, one day we all will die and no animal will be left in this jungle”

Listening to both the deer and the bear, an elephant said, “I have an idea for this. Let us tell the lion that we shall send his food every day to his place. Each day one of us will have to go to the lion voluntarily to save the rest of the animals in the forest”

All the animals knew that this was a sad choice but they all have to agree with it to save the fate of the jungle. A fox was chosen by all the animals to convey this message to the lion.

So, the fox went to the lion and said, “Your majesty, I came here on behalf of all the other animals in the jungle to convey a humble request. We are very scared of the fate of the jungle as you are killing at a rate that one day none of us will survive.

The fox continued, “We came here to request you to stay in your den always and every morning we will send you an animal as your food. This helps us to survive in the forest as you won’t have to hunt for your food.”

The lion roared, “Hahaha, Now I can get my food to my den without hunting. I agree with your deal but in case if you fail to send me the food, I will kill all of you!”

From that day, one animal or the other went to the lion willingly as his food. On the first day, it was a turn of the deer. The next day, the zebra went to the lion. Next, it was the turn of the buffalo to become the lions’ lunch. Then went on for a while.

One day, it was the turn of a rabbit. The rabbit was very clever. While walking through the forest, the rabbit kept on thinking about how to escape from the lion. He took a nap in the middle of his way and when he woke up, he realized it was late afternoon. It somehow reached the lions’ den.

The lion, who was very hungry roared at the rabbit angrily. “What took you this much time to reach here. Where have you been? I was waiting since morning and the animals sent a little rabbit to me. You will not satisfy my hunger. I shall teach the animals a lesson for sending me such a tiny animal! I will kill you and also all other animals.”

Then the rabbit replied “I am very sorry your Majesty but I got late because of the other lion in the forest. He said that he was the new king of this forest and also wanted to eat me. I escaped from him and came to you. That is the reason it took very long to come here my king.”

The lion roared, “What else did he say?”

The little rabbit said, “When I told him that I was to be your lunch, he asked me to inform you that he will kill you if you won’t leave the jungle.”

Listening to the rabbit, the lion became more furious and roared, “Take me to him. I shall kill him and show him who the real king is!”

The little rabbit agreed to take the lion to the other lion. The clever rabbit took the lion to a well. Pointing at the well he said, “Your Majesty, this is the den when he lives.”

The angry lion went near the well and looked into it. He saw his own reflection in the water but he thought it was another ferocious angry lion.

He roared angrily, “I shall show you who the real king is!”. The echo of his voice came back even bigger. The foolish lion became more furious and jumped into the well to kill the other lion. He got hit by a rock as he fell into the water. He got drowned and died because of this foolishness.

The rabbit went back happily to the forest and told the other animals what had happened. All the animals were very happy hearing this and praised the little clever rabbit for saving them and the fate of the jungle from the ferocious lion.

“Wisdom is better than strength”

The story of the Foolish Lion and The Clever Rabbit is based on a story titled “Numskull and the Rabbit” from the book Panchatantra. It was illustrated by Vishnu Sharma in Sanskrit and was later translated to English by Arthur William Ryder. This is one of the most loved stories by the kids.

The Panchatantra is one the oldest surviving collection of Indian fables written around 200BC by Pandit Vishnu Sharma, a great Hindu scholar.

Panchatantra means five books and it has nearly 84 stories which were originally written in Sanskrit. All the stories in Panchatantra teach us important values and morals.

“Mind is mightier than muscle” 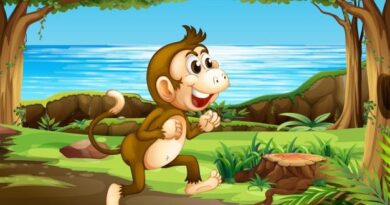 The Monkey and Crocodile Story for Kids in English 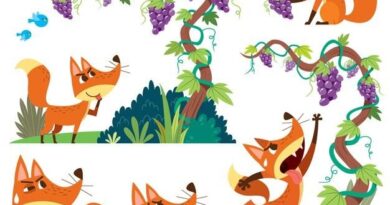