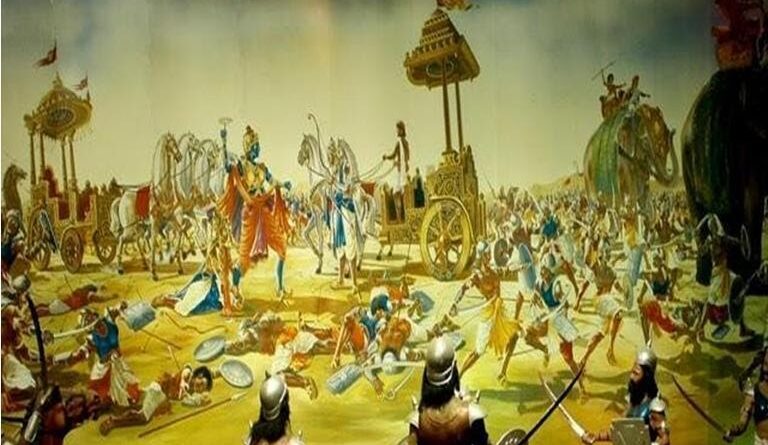 Ekalavya story is one of the most popular and fascinating Mahabharat tales. Especially children like this story for its ease of understanding and the engaging story that it is. If one observes closely, Ekalavya’s story contains many hidden aspects than what we can see.

As we move on, let us revise this beautiful story and understand it in simple terms. The version of Ekalavya and Dronacharya story given here is from the Maharshi Ved Vyasa’s version of Mahabharata.

What is Ekalavya Dronacharya story?

This story is about the sincerity of a student while learning the skills. It is also a tale that establishes the importance of the Guru or teacher. The character of Dronacharya also tells us how important one’s duty is when compared to any other aspect.

According to Mahabharat, Ekalavya is a tribal boy. He is the son of a tribal king Hiranyadhanus, who was the head of the Nishadha tribe. The tribe used to live on hunting and forest produce. Hiranyadhanus used to be the General of the Army under King Jarasandha, the ruler of Magadha.

Dronacharya is one of the greatest gurus of Mahabharatha times. He was the son of Sage Bharadwaja and a descendant of Sage Angirasa. Guru Drinacharya was adept in various military arts. He used to train both Kauravas and Pandavas.

The Story of Ekalavya and Dronacharya

Ekalavya is a great lover of knowledge. Being the son of the head of the tribe, he always understood the power of skills and education. At the age when he realized that education is important, he approached his father Hiranyadhanus, and expressed his interest in learning warfare.

By that time, the popularity of Dronacharya was well known in many countries. Thus, Ekalavya took permission from his father to learn warfare from the Great Guru. Thus, he set off to Hastinapura, where the royal families of Kauravas and Pandavas lived.

As he was approaching the palace, Ekalavya saw a group of princes listening devotedly to an elderly guru. It was then Ekalavya realized that the guru is none other than the Dronacharya. He approached him in respect and wished him whole with devotion.

Droancharya blessed him and enquired, “Who are you? Who are your parents? Where are you coming from?”

Ekalavya answered, “Oh Great Guru, I am Ekalavya, the son of Hiranyadhanus who is the ruler of the tribe Nishada tribe. I am here to seek your blessings and learn warfare from you. Please shower your blessing on me and teach me warfare.”

Stunned Dronacharya replied, “Oh boy! You are from tribes. I am the master of princes and shall teach only to them. Only kshatriya students are eligible to learn knowledge from me. You go away from here first!”

With this unexpected answer, Ekalavya was taken aback. But it is a norm that despite what Guru may say, no one should talk back to them under any circumstances. Wise Ekalavya knew this and went back away with disappointment.

How did Ekalavya learn skills?

Though he was rejected by his guru, Ekalavya had an intense respect for Dronacharya. He acknowledged him as his sole guru and prepared a statue of him with mud. He used to worship that statue and practice warfare and shooting arrows with utmost concentration.

Soon, he mastered all skills that Dronacharya taught to Kauravas and Pandavas there in Hastinapura. Time passed by in this way.

One day, Dronacharya, as a part of teaching hunting to the princes, took them to the forest nearby. Along with them, soldiers and dogs were also accompanied as a norm. As some time passed by, the Guru and students and the soldiers took rest under a tree.

Suddenly, one of the dogs started barking. Within no time, one after the other seven arrows rushed towards the dog and closed its mouth so that it cannot bark.

Astonishingly, the arrows did not hurt the dog. They only silenced it so that it won’t bark and disturb others. Everyone there including Guru Drona and Kauravas and Pandavas was surprised intensely.

Dronacharya taught, “Who would have these expert skills in shooting arrows other than my students!! Whoever did this, had only one source – the sound of dog barking. Just with the sound they could do this skillfully.”

He wanted to see that great archer who did this wonder. With this intention, he set along with his students to see who performed this feat.

As they traveled a little further in the forest, they witnessed a young man who was quenching his thirst at the pond nearby. He had bows and arrows on his back, confirming that he must have done this act.

Guru Dronacharya asked him, “Who are you? May I know who your Guru is? You are really lucky to have such a great person as Guru. I want to know about him.”

Then Ekalavya humbly replied, “Oh great man, my Guru is Dronacharya. I am Ekalavya, the son of Hiranyadhanus, the king of the Nishada tribe.”

Dronacharya was startled. He replied, “Dronacharya lives in Hastinapura, and you are here. I don’t think Droancharya knows about you”.

Then Ekalavya replied, “I have considered Dronacharya as my Guru from my soul. He doesn’t know about it.”

Surprised, Dronacharya tried to recollect Ekalavya. He could remember that he sent away a tribal boy many years ago, who approached to learn warfare from him. He appreciated Ekalavya in his heart fully.

But he is in a dharmasandighdha, a situation where mind and heart clash. He is the royal Guru and his duty is to prepare princes with unmatched skills. Either knowingly or unknowingly, he should not cross this duty. Besides, he promised his favorite student Arjuna that he will train him to be the number one archer in this world.

If Ekalavya is allowed to master more skills, then all these dharma and promises will go in vain. So, he thought to rip away the mastery that Ekalavya had.

Hence, with a stone-like heart, Droancharya asked Ekalavya, “Oh Ekalavya, I am that Drinacharya you were mentioning. If you learnt everything by considering me as Guru, then you should give me Guru Dakshina.”

Guru Dakshina is a humble pay that students give to the teachers who teach them skills. It can be fruits, services, or gold, and any other that the Guru demands.

Now, Ekalavya was filled with ecstasy. Finally, he saw his guru again. Now he is ready to fulfill whatever his guru orders him. “Please order me Guru. It is a great satisfaction to give what you seek for!”, he said.

Dronacharya replied, “Give me your right-hand thumb as Gurudakshina.”

Ekalavya was stunned, but stayed calm and got back to normal immediately. Without even thinking twice, he cut his right-hand thumb and offered it to the Guru.

What happens next after Ekalavya cuts his thumb?

An archer indeed needs a right-hand thumb for his continuing skill. Ekalavya, who respected his Guru’s word, did not ever feel bad about this decision. He started practicing archery and warfare with his left hand and feet. Very soon he became an unbeatable warrior. He also became the King of Nishadas.

Moral of the Ekalavya story:

Thus, epics teach us that as a student it is one’s duty to obey whatever the Guru orders. If we look at this story, we may feel that Dronacharya has spoiled the life of Ekalavya. But it is a very false notion. He just did his dharma as Raja Guru and the trainer of princes and to keep alive the promise he gave to Arjuna. He just did his duty.

A disciple must stay true to their teachers. Because teachers are considered as alternate forms of God in Hinduism. Whatever they say contains deeper meaning and hence students should never insult them or disagree with a real Guru.

A loss should not stop a learner from learning. One weak spot should not stop us from achieving great things. We should focus on our strengths, rather than our minuses. Ekalavya never bothered about not having his right thumb. He used his other hand and feet and mastered warfare. 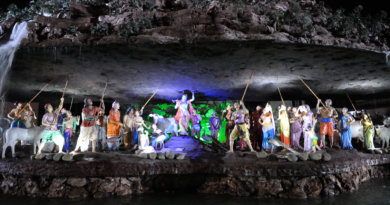